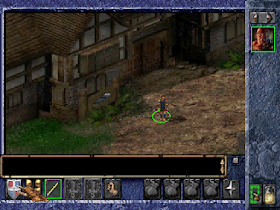 Before swap CD, save state to file, next CD, upload save state file.
Genre: Role-Playing (RPG)
Perspective: Bird's-eye view
Visual: 2D scrolling, Isometric
Gameplay: Action RPG
Setting: Fantasy
Published by: Interplay
Developed by: Runecraft
Released: 1998
Platform: PlayStation (PSX, PS1)
The game was developed based on the licensed rules of the board role-playing game Advanced Dungeons & Dragons, however, some elements of the system have been modified taking into account the fact that the game is not turn-based.
Every character in constant motion, while there is a controlled pause function, during which you can give orders to the characters, and then, taking the game off the pause, to monitor their implementation. The game is divided into seven chapters, each of which denotes a certain logical part of the plot. Perhaps a free study of the map of the world, but there are some places that don't open, until the player passes to any mark in the game.
The player starts with one poorly equipped character, but as he goes along he can put together a team of up to 6 members, each of which improves their abilities with experience, it is also possible to improve (find, remove from killed enemies, steal, buy, get as a reward) the equipment of characters.
The game is controlled in real time, using a tactical pause.
‹
›
Home
View web version