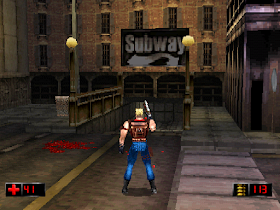 Genre: Action
Perspective: Behind view
Gameplay: Shooter
Interface: Direct Control
Setting: Sci-Fi / Futuristic
Narrative: Comedy
Published by: GT Interactive Software Corp.
Developed by: n-Space
Released: 1998
Platform: PlayStation (PSX, PS1)
In Duke Nukem: Time to Kill, the invincible Duke engages in battle with alien mutants seeking to capture earthly babies, which threatens the destruction of the Earth. The task of the hero is complicated by the fact that the bastards can travel through time. Chasing them Duke finds himself in ancient Rome, in Medieval Europe and even in the wild West.

For the first time in the long history of this character, you have the opportunity to play Duke Nukem in the perspective of a third person. True, this will not make major changes in the nature of the game. New in the game - the ability to travel in time. The whole game is divided into four or five belts, significantly distant from each other in time. You materialize in Ancient Rome, the Wild West or Los Angeles of the next millennium and each time you find landscapes, weapons, clothing and other attributes corresponding to the era and the area where you were. The rules of the game will also change. To get out of each time zone, you have to spend a lot of time: wander through the levels for a long time, until you complete all the tasks of this stage, look for switches, different things and tunnels that help you to get to the exit. But beware, even at the exit from the level you are in danger. No matter what era you are in, you will not have to complain about the weapon, because instead of firing using the automatic guidance system, your weapon pierces everything that is in front of you, hitting a rather large zone with one shot. If you need to deliver a high-precision “point” strike, use the special mode. The camera will be behind Duke, the hero himself will become translucent, and many small red dots will appear on the screen, with the help of which you will be able to destroy any target without destroying everything that is around. So, it is possible to shoot down the enemies with shots, break telephone sets, knock down street lights, and blow up oil towers or tanks from a long distance, along with a couple or two of pigs dangling alongside. If you accidentally shoot a shelter, you may find it is not an extra piece of health. In addition to shooting, the game developers endowed Duke with the ability to climb huge containers, climb slopes, craters, run stairs, do back flips, etc.

Old acquaintance Duke Nyukem, again with us. Together with him you will pass through the temporary stream and visit various places - from the Wild West to Ancient Rome, you will again kill everyone who stands in your way, solve several riddles that wise heads have invented for you - the developers. Unplug your grenade launcher - because you have to kill more than one hundred enemies.

Most of the levels in this game are fairly straightforward, so you will need basic help in finding some important items, keys, and secret areas. In this description you will find instructions that will help you discover all the secrets - sometimes getting to the secret is much more difficult than getting its contents. In addition, there are several ways to more effectively hit your opponents.
Maybe, of course, stand still and shoot at enemies - a good reception for a brave warrior, who believes that it is easier to aim at him, but if you value your own life, then you will avoid this tactic, especially in melee - otherwise you head. Always be sure that you can safely move from side to side while you are shooting, as this simple technique will save you many times in the midst of a terrible slaughter. It is also sometimes quite reasonable to roll back at the moment of the shot - thus you can increase the distance between yourself and the enemy and his attacks will become less accurate - this is especially successful if the enemy does not possess long-range weapons. If you achieve the proper professionalism in shooting, you can save a lot of time and ammunition if you shoot at the enemy’s head — use the aiming button to point directly at the enemy’s head, then knock it off your shoulders. This is the fastest way to kill the enemy.

In this new game, Duke has a very extensive selection of weapons and explosives, with which you can arrange a bloodbath for your enemies, destroying all aliens who dared to disturb your peace. Each type of weapon in its collection has its own characteristics, so that the right choice of weapons may be the key to success in any battle.

If you want to become a professional Duke, then you will need to master several quite specific jumps, starting with the simplest and ending with relatively exotic ones. You can move in any of the four directions, forward, backward, left, right. The jump on the spot can be performed by pressing the jump button and the arrow of the direction you want. The second type of jump - with a run up, for this you just need to press the jump button on the run, in the end you jump a little further than usual. Consider that in order to jump off the run, you must take two steps.
In addition to jumping, Duke also manages to grab at different edges, and then pull up to get into places that look completely unattainable. In order to cling to the edge, you just need to press and hold the jump button, at the moment when the Duke flies through the air in the direction of the ledge. As a result, you stretch your arms forward and grab the file. Once you’ve been holding onto the file, you’ll have to press the Up button in order to climb onto the ledge, and then Down to release it.

In the course of the game, you will often have to properly work with your faithful weapons in order to clear the galaxy from any rabble who has decided that he is allowed to decide people's fates. Many of your opponents will not only feel an ardent desire to tear off your head, but also will have all the necessary data for this. In order to help you with this question, here is a guide to combat the aliens who will meet you on the way to your main goal - the Guardian of the Gates to Moloch, by destroying which you will save the universe.
‹
›
Home
View web version