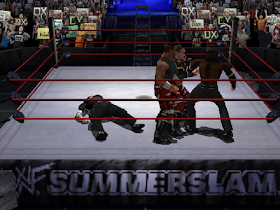 Genre: Sports
Perspective: 3rd-person
Sport: Wrestling
Published by: THQ Inc.
Developed by: Asmik Ace Entertainment, AKI Corporation
Released: 2000
Platform: Nintendo 64 (N64)
This game is the best wrestling simulator on the Nintendo 64, so it was very critically accepted by the critics as a rich roster and realistic gameplay.

The player takes control of a wrestler without rules - a wrestler. The fight takes place in the ring, as well as outside for 10 or 20 seconds, or, if established by the rules, indefinitely. At the same time in the ring can be up to 8 fighters, players can manage only four at a time. Each wrestler has a unique set of strokes and techniques. During the capture, the player can strike, throw, go behind the opponent’s back or push him onto the turnbuckle or ropes. Also, the player can block a blow, strike a counter or dodge (depending on the strike). In addition, the player can run, climb on turnbucks and edges of the ring and from there to strike blows at the enemy. To win, a player must hold the opponent on the shoulder blades for three seconds or force them to surrender from a painful hold.
During the battle on the screen displays some elements of the HUD, which can be disabled in the options. Under the model of the fighter is the player's scale, which displays energy, the indicator of readiness to surrender and their angle.
Unlike the real show, in the game in the ring, the judge is not present, and also there are no commentators. It should be noted that there is practically no physics in the game: for example, the fragile girl Lita can easily lift a 130-pound Undertaker above her.

A single fight - one fight, without any awards and titles. Possible victory withholding or pain (optional).

In WWF No Mercy, as in most other sports simulators, the creation of your character is available. You can choose the gender, skin color, appearance, voice, techniques, combat characteristics, clothing, way out, special effects with him and the image on the titantrone. Clothing is selected by separate fragments: you can “stick” the sleeves and the legs and so on to the starting material (T-shirt and shorts).

All characters in the game have prototypes in a real show.