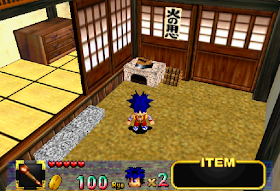 Genre: Action
Perspective: 3rd-person
Art: Anime / Manga
Gameplay: Platform, Puzzle elements
Published by: Konami Co.
Developed by: Konami Computer Entertainment Osaka Co.
Released: 1997
Platform: Nintendo 64 (N64)
It is one of the few games in this saga that has managed to leave Japan, also reaching Europe and the United States. United. He has managed to be among the 35 best games of Nintendo 64. In Nintendo 64 he has two sequels: Ganbare Goemon: Dōchū Obake Tenko Mori (Goemon's Great Adventure in America and Mystical Ninja Starring Goemon 2 in Europe) and Goemon: Mononoke Sugoroku, unpublished in West.

It is the story that develops throughout the game and could well serve as a guide for this. The story begins when Japan is flown by a spaceship, the aliens call themselves the shoguns of Mount Peach, and capture the princess of Oedo Castle . Goemon and Ebisumaru go after the aliens to rescue the princess. Along the way they will be joined by several allies, Sasuke the robot and the ninja Yae, as well as a giant robot called Impact, who goes to the call of Goemon when he is most needed .
Goemon and his friends must travel to space to defeat the shoguns, Lily and Dancin. Finally they defeat them with the help of the Impact robot.
The first dungeon is the Oedo castle, in which Goemon and Ebisumaru manage to defeat the shoguns for the first time, shortly after the first battle with the giant robot Impact arrives, after they manage to reach Zazen town, where they are joined by Yae. To continue the journey they need to beat Benkei, who guards the bridge to leave the city, after beating the robot is handed Sasuke, but without batteries to function. For the next Ebisumaru dungeon you must obtain the magic to access through passages and defeat the head of the castle of the ghosts.
Later Goemon finds the batteries for Sasuke to work, since his bombs are necessary to access the third dungeon Festival Temple. After defeating the enemies of that region they must go to another one, for this it is necessary the magic of Goemon, which makes him stronger to move metal blocks. This is how you get to a new city, where Yae learns the magic to dive to get there to a new dungeon, Gourmet submarine castle, which ends with another battle with the Impact robot. The next thing is to find the kappa Keihachi, who lives in Zazen town, to get the magic of Sasuke.
Once the four special Goemon items have been obtained and the rest must travel to space, where they meet Omitsu and Wiseman, who arrived next to a region that the shoguns raised, in the dungeon "Georgeus my stage" the last battle is fought.