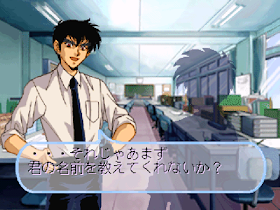 Genre: Adventure
Gameplay: Visual Novel
Published by: Bandai
Developed by: TOSE
Released: 1997
Platform: PlayStation (PSX, PS1)
Nube is a schoolteacher who at the same time plays the role of an exorcist expelling evil spirits. The plot is a series of sketches from the life of Nube and his students.
Meisuke Nueno or Nube - the main character, a 25-year-old male who plays the role of a teacher and an exorcist. The main weapon of Nube is “the hand of them,” in which they were sealed with which the teacher had once fought. However, they cannot usually reveal the full potential of the forces of Nube, since in this case he risks being himself absorbed by the demon. He is also able to work on evil spirits, reading a special sutra. Nube equally values ​​both her specialties and is always ready to help her students solve problems with evil spirits. Outside of work, he tends to squander his small salary in a pack, as a result of experiencing problems in getting food for himself.

Hiroshi Tateno is one of Nube's disciples. Not a great mind and is the worst student in the Nube class. At the same time, courageous, brave and ready to fight any obstacle in his path. Initially, he considered the exorcism of Nube to be ordinary charlatanry, but soon he was forced to admit that the teacher had mystical powers and became one of his most loyal supporters. Sayyu: Toshiko Fujita
Kyoko Inaba is a student of Nube, characterized by a hot-tempered character. At the same time, he takes care of both other students and the teacher. Trusting Nube's talent more than anyone else in the class. Sayu: Rumi Kasahara
‹
›
Home
View web version