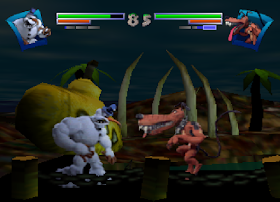 Genre: Action
Perspective: Side view
Visual: 2D scrolling
Gameplay: Fighting
Setting: Fantasy
Narrative: Comedy
Published by: Interplay Entertainment Corp.
Developed by: Interplay Entertainment Corp.
Released: 1998
Platform: Nintendo 64 (N64)
In the game, the most inconceivable creatures that only came to the head of the creators of this game are fighting. Of course, for some, this is an indisputable advantage, but just as a fighting game, the game is rather mediocre, designed primarily for fans of the genre.
‹
›
Home
View web version