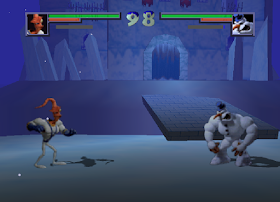 Genre: Action
Perspective: Side view
Visual: 2D scrolling
Gameplay: Fighting
Interface: Direct Control
Setting: Fantasy
Narrative: Comedy
Published by: Interplay Entertainment Corp.
Developed by: Interplay Entertainment Corp.
Released: 1997
Platform: Nintendo 64 (N64)
The continuation of the fighting game. Initially, 9 foolish characters are given for selection (Jim's worm may well be counted among them). 5 levels of difficulty. During fights, the graphics tend to slow down, which makes fights somewhat crumpled. Naturally, each character has its own special blows and combos, for victory you have to knock out your opponent twice. In general, everything is quite simple and without frills.
‹
›
Home
View web version