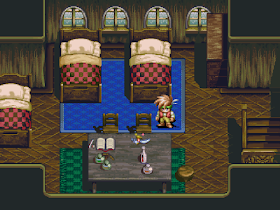 Genre: Role-Playing (RPG)
Perspective: Top-down
Art: Anime / Manga
Pacing: Turn-based
Setting: Fantasy
Published by: Sun Corporation
Developed by: Sun Corporation
Released: 1996
Platform: SEGA Saturn
This game is the first Albert Odyssey game to be released in English and the first to include traditional turn-based role-playing elements instead of tactical strategy-based gameplay. The Legend of Eldean is the "gaiden" or ancillary story of the original games and contains background stories, characters and acts that are separate from the previous pieces of the series. The North American edition has been criticized, but the translation of the game into English has been criticized for its overly humorous character and the differences with the original Japanese version.

The main character of the game is Pike, a young boy whose family was killed by a horde of monsters in his infancy. Winged people, harpies were found and raised. Ten years after his family's death, another tragedy is happening to him; his "sister" turned a wicked magic into stone. With Cirrus, a talking sword that a fallen priestly spirit took up, Pike starts looking for a cure to change his sister, but later discovers that evil magicians have turned the peoples of the world against each other and are trying to revive an ancient god, Vlag. With the help of his friends, Pike must prevent the resurrection of evil.

Pike - a man to whom harps have been found and raised after the city of his parents has been destroyed. He inherited his father's enchanted sword, Cirrus.
Eka - a singer with whom Pike meets in Gigarl. They have strong magic abilities and Pike stays until the end of the game.

The Legend of Eldean's music was acquired by Naoki Kodaka, who had previously composed two Albert Odyssey titles. The background music combines the sounds of Sega Saturn's built-in sound clip and the instrumentation recorded in Japanese Music Farm Studio. Some songs use a CD-quality impulse code modulation technique instead of a sequential MIDI-based method, resulting in a more complete, more realistic sound.
‹
›
Home
View web version