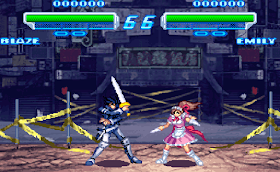 Genre: Action
Perspective: Side view
Visual: 2D scrolling
Gameplay: Fighting
Art: Anime / Manga
Published by: Foxbat
Developed by: ex-SNK staffers
Released: 2017
Platform: Super Nintendo (SNES)
The plot of the game tells about a group of hunters, tracking vampires, werewolves and other monsters, leading an active nightlife. In the best traditions of the genre, each character has unique techniques, up to eight in total, and one combo strike. All this makes the fights extremely intense and intense. In addition to all of the above, the game features four game modes Story, Versus, Survival and Practice.
‹
›
Home
View web version