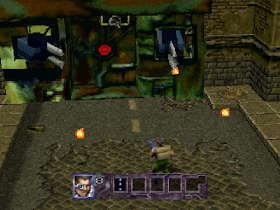 Genre: Action
Perspective: Bird's-eye view
Visual: 2D scrolling
Gameplay: Arcade, Shooter
Setting: Sci-Fi / Futuristic
Published by: Konami of America
Developed by: Appaloosa Interactive
Released: 1996
Platform: PlayStation (PSX, PS1)
Colonel Bassad, the dictator of a small country, bought a stolen alien embryo in order to create an entire alien army. Rumor has it that Bassad supports an alien creature that helps him conquer the world together. But these plans will soon find out the squad "Hard Corps". Ray Power was transferred to the scene. His companions are the mercenary Tasha, the alien Bubba, and a robot named CD-288. This company must interfere with the plans of the crazy Bassad and his alien friends to take over the world.
‹
›
Home
View web version