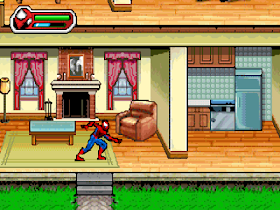 Genre: Action
Perspective: Side view
Visual: 2D scrolling
Gameplay: Fighting
Published by: Activision Publishing
Developed by: Vicarious Visions
Released: 2005
Platform: Game Boy Advance (GBA)
Adventure walker. The idea to create this game belongs to the comics of the modern development of the company MARVEL. Our superhero Spider-man has a completely different storyline than we saw before in cartoons and comics. Over time, everything changes! Only here the main game concept does not change, as we have yet another fermentation action. The game is fascinating from the first minutes and you do not calm down until you pass it. It is necessary to play both for Spider-man, and for his enemy - Venom. I advise everyone!
‹
›
Home
View web version