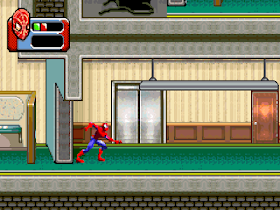 Genre: Action
Perspective: Side view
Visual: 2D scrolling
Gameplay: Platform
Interface: Direct Control
Setting: Fantasy, North America
Published by: Activision Publishing
Developed by: Vicarious Visions
Released: 2007
Platform: Game Boy Advance (GBA)
Villains do not live in peace. The streets of New York once again became a haven for gangsters, sowing havoc and horror among civilians. The police are not able to cope with the monstrous level of crime, especially since supernatural forces are at the head of ordinary groups. But the mysterious lonely hero, the fearless Spider-Man, is once again ready to defy the forces of evil, and this time a crushing weapon has appeared in his arsenal that can both save and destroy this city! Spider-Man 3 was created based on the third part of the movie about Spider-Man. You will be able to control a hero dressed in a mysterious black suit for the first time. In it, the forces of Steve Parker gain unprecedented power. Even greater speed, endurance, vitality and agility allow you to prevail over any opponents. But for these abilities, sooner or later have to pay. Can Steve give up the incredible and necessary in the fight against evil forces, before the mysterious costume enslaves the owner? All the best in one game! Spider-Man 3 combines the most interesting elements of previous episodes: the grim atmosphere of the crime-ridden New York, a breathtaking plot and colorful characters. Hero in black! Wearing a mysterious costume, Spider-Man appears in a new role. He draws from the very Darkness forces, which at first can be controlled. But over time, the black suit acquires its own will ... The place of action is New York! Acrobatic stunts on the threads of the web, chases and fights with criminals occur on the streets of a huge metropolis! The city is traced in the smallest details: from rooftops of skyscrapers to the metro and sewage - a brave hero everywhere there is an occupation! Absolute freedom! You can go anywhere and anytime! There are no limits to Spider-Man 3. Focus on the main plot or look for alternative tasks, fight street gangs, prevent car thefts, robberies, acts of terrorism or solve the mystery of a black suit - you decide. Street Wars! The city is divided between three dangerous gangster groups. Each of them controls a part of quarters, the situation in which is worsening every day. Clean street after street from criminals so that residents can breathe easy and are not afraid to leave their homes. But remember: attackers will certainly try to recapture lost territories. Spiderman doesn’t need a weapon! The new combat system, including special techniques, combinations of strikes and "finishing", allows you to suddenly attack enemies, toss them into the air and throw into the walls. Hands and legs - the main weapon of the hero. Villains do not surrender! Insidious anti-heroes have become stronger, it is almost impossible to cope with them without using dark forces. But if the black suit turns on you - get ready for an unprecedented show. Fights with the leaders begin in one part of the city on the roof of a building, and end ten blocks in a dark basement! Destructive fights with jumps, explosions and shootouts have never been so exciting! Mastery has reached a new level. With the help of a web, the hero catches falling people or parts of buildings, repairs broken objects - for example, railway rails - barricades doors and climbs skyscrapers to an enormous height! Live and learn. Over time, Spider-Man learns additional moves and strokes, becoming faster, more agile and stronger. Character characteristics are continuously growing, reaching a maximum in the final fight.
‹
›
Home
View web version