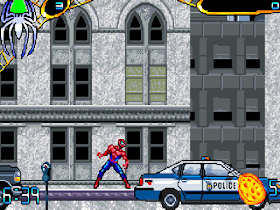 Genre: Action
Perspective: Side view
Visual: 2D scrolling
Gameplay: Platform
Interface: Direct Control
Setting: Fantasy, North America
Published by: Activision Publishing
Developed by: Digital Eclipse Software
Released: 2004
Platform: Game Boy Advance (GBA)
Dr. Octavius ​​during an unsuccessful experiment on the use of solar energy turns into a super-villain gripped by an obsession to take over the whole world.
So for Peter Parker again there is a great opportunity to show the planet the power and unique capabilities of Spider-Man. But hurry, Dr. Octavius ​​is already on your trail, and he is determined to destroy the only person who can interfere with his plans. You have to climb up and down all the nooks and crannies of New York, constantly bumping into mobile gangs of strong guys working for the crazy professor. Of course, not just once or twice, you will have to prove your skills and conquer the steep roofs and sheer walls of the giant skyscrapers of Manhattan. Yes, and do not forget the main goal of your adventures - the deliverance of mankind from the evil genius of Dr. Octavius!
‹
›
Home
View web version