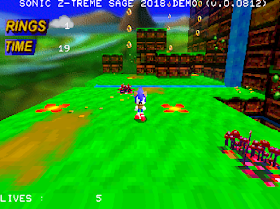 Genre: Action
Perspective: Behind view
Gameplay: Arcade
Art: Anime / Manga
Published by: XL2
Developed by: XL2
Released: 2018
Platform: SEGA Saturn
Sonic Z-Treme is a new game for the Sega Saturn inspired by the ill-fated Sonic X-Treme.
While Sonic X-Treme relied on sprites and the fisheye view camera and worked correctly only on pc, this game relies heavily on 3D, including the player's model and enemy models, while also aiming for a stable 30 FPS on the Sega Saturn.
This game also includes a splitscreen multiplayer mode where you can either play the full game versus or coop!
Keep in mind that little time was put on the gameplay/controls/physics since most of the time was put on the engine itself and all the different tools I needed (SDK...) to create the game and making it work on Saturn. As such, the SAGE 2018 demo is more a tech demo than a full game, but as the engine becomes more mature I will focus more on the gameplay and levels. Also, the game is supposed to be played as a sidescroller (d-pad friendly), unlike a game like Super Mario 64. The whole control system is designed to keep momentum, so it's normal you can't turn 90 degrees right away when you're running at full speed and you're not supposed to rotate the camera all the time to keep it behind you!
‹
›
Home
View web version