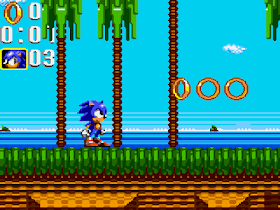 Genre: Action
Perspective: Side view
Visual: 2D scrolling
Gameplay: Platform
Art: Anime / Manga
Published by: SEGA Enterprises Ltd.
Developed by: Aspect Co.
Released: 1994
Platform: SEGA Game Gear
Sonic Triple Trouble is a sequel to Sonic Chaos (Sonic & Tails in Japan). In the story, the main characters of the game, Sonic and Fox Tails, are collecting Chaos Emeralds on the South Island, which were scattered by Dr. Robot while testing their new invention. The gameplay is practically no different from the previous parts of the series: the player must pass a number of levels, collecting gold rings along the way and attacking enemies.

Sonic the Hedgehog Triple Trouble is a genre platformer, made in 2D graphics. In the story, Dr. Robotnik again captured the Chaos Emeralds, however, during the testing of a new nuclear weapon, a closure occurred, with the result that the Emeralds again scattered throughout the island. The main characters, hedgehog Sonic and Fox Tails, go in search of these stones. However, Fang Sniper, who wants to get money for them, and echidna Naklz are interested in emeralds.
In Sonic Triple Trouble there is an opportunity to play both for Sonic himself and for Tails' cub. The gameplay has not changed much compared to the previous parts of the series: the player’s character has to go through six game zones (“Great Turquoise”, “Sunset Park”, “Meta Junglira”, “Robotnik Winter”, “Tidal Plant” and “Atomic Destroyer”), each of which is divided into three acts and filled with robots - Badnik. Enemies can be attacked by folding into a thorny tangle in a jump, or by using the spin dash technique, accelerating on the spot and attacking with a high-speed blow in the roll. At the levels are scattered gold rings that serve as protection from enemies, and when collected in 100 pieces, the character is given an extra life. If a player does not have at least one ring, then his character dies when confronted with robots or dangerous objects - for example, spikes. Otherwise, Sonic or Tails loses some of the collected rings. In addition to the rings, there are numerous bonuses at the levels that are stored in special monitors - for example, temporary invulnerability or extra life. Passage of each act is limited to ten minutes; depending on the time spent at the end of the act, the player is awarded bonuses in the form of extra points, rings, or life. In the event of the death of a character, the game begins either anew, or from a control point. To complete the passage on the first two acts, you must touch the plate with the image of the Robotnik; at the end of the third act, the boss battle is fought by the Robotnik himself, Knuckles the Echidna, or the badnik robots. In addition to the main game, Sonic Triple Trouble features Time Attack modes, which offer the passage of levels in minimal time, and Sound Test, where you can listen to music.
The game also features Special Stage, designed to collect Chaos Emeralds. The action of the first, third and fifth levels takes place in a labyrinth, and in the second and fourth - in the air on the plane "Tornado". To get to a special level, the player needs to collect 50 rings at the level and destroy the monitor with the image of emerald. In the maze, the player must beware of Feng Sniper, which prevents Sonic and Tails from getting the Chaos Emeralds, and during the flight - the main characters need to dodge mines and bombs that can slow down the speed of running. In the case of a successful passage of the character gets a stone, and the player is charged extra points for the collected rings. The game has six Chaos Emeralds, the last of which must be obtained after the battle with Fang.
‹
›
Home
View web version