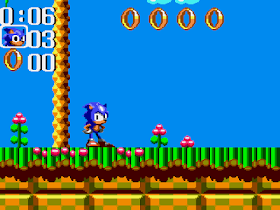 Genre: Action
Perspective: Side view
Visual: 2D scrolling
Gameplay: Platform
Art: Anime / Manga
Published by: SEGA Enterprises Ltd.
Developed by: Aspect Co.
Released: 1993
Platform: SEGA Game Gear
The development of Sonic the Hedgehog Chaos began after the release of the portable version of Sonic the Hedgehog 2, in 1992. Although the gameplay is no different from its predecessors, the team nevertheless introduced innovations into the game and developed the concept of the previous parts of the series. During development, Sonic the Hedgehog Chaos has also undergone changes in terms of level design and some game elements.
After the release of Sonic the Hedgehog Chaos received positive feedback from the press. Of the advantages of the game, observers called graphics and music, but criticized some elements of the gameplay. Despite the high marks, the project failed to win due popularity among fans due to weak sales of the Master System and Game Gear consoles. In 1994, a sequel called Sonic the Hedgehog Triple Trouble (Sonic & Tails 2 in Japan) was released.
This game is of the genre of platforms, which is based on passing certain levels and obstacles in 2D scenarios, each with a different setting.
Here, there are two possible characters to pass the game. One of them is Sonic, with which you can recover the Emeralds of Chaos and truly pass the game. In addition, it begins with three lives and no continuation. The other character that can be chosen is Tails, which corresponds to the easy level of the game, with which you can not get any Chaos Emerald and start with five lives and three continuations.
The game is made up of six stages.
The first five phases are composed of three acts each, in which the first two are based on the protagonists must pass through obstacles and enemies to reach the end of the act. To reach the end of this, if the character that controls the player is Sonic, you have two options: Take 100 rings, in order to conclude the act and access a special phase, with which you choose to obtain an Emerald of Chaos or reach a panel that Sonic must spin, which indicates the end of it. In the case that Tails is the playable character, to conclude an act, he must touch the rotating panel, because if he gets the 100 rings, he simply gains an extra life. In the last act, they must defeat one of the monsters created by Doctor Robotnik.
The sixth phase has the same structure, except that Sonic (or Tails) must fight with Doctor Eggman in person, thus concluding the game.
‹
›
Home
View web version