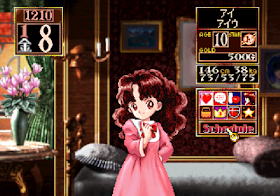 Genre: Role-Playing (RPG), Simulation
Perspective: 1st-person, Top-down
Art: Anime / Manga
Setting: Fantasy
Published by: Micro Cabin Corp.
Developed by: Gainax Co.
Released: 1995
Platform: 3DO Interactive Multiplayer
Princess Maker 2 is the second game in a series of simulators of a girl's upbringing life. In this game, we have to devote all the time to raising a girl, to invest in her all the best qualities, to dress her, feed her, heal, etc. that will take a lot of money. The game has 74 variants of different endings, in the best variant at the end, your daughter becomes a princess, which is why the game got its name.
The game takes place in a fantasy anime world modeled on medieval Europe. Actions in the game begin in 1210. We have to play for the warrior who defended the kingdom from the Prince of Darkness - Lucifer. That is why you are a famous hero and not the last person, while still receiving an annual salary from the palace. One day, the gods grant our child a heavenly child. You have to raise it and bring up in age from 10 to 18 years. There are many different scales that will be filled depending on what you will focus on in raising a girl. Sometimes you will be visited by a god patron.
‹
›
Home
View web version