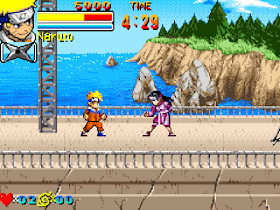 Genre: Action
Perspective: Side view
Art: Anime / Manga
Gameplay: Fighting
Published by: Tomy Company
Developed by: Aspect Co.
Released: 2004
Platform: Game Boy Advance (GBA)
Players control one of the great ninja Uzumaki Naruto or Uchiha Sasuke on 7 levels, where very dynamic battles with ninjas take place. Each of the characters perfectly jumps, performs lightning jerks, basic attacks, and can also “charge” the chakra to activate special moves. Characters differ from each other in their abilities. Sazuki is much faster, but magic is not so powerful. Players deal with enemies, overcome various obstacles, and then fight the boss, and this is the culmination of each level. After defeating him, the heroes go to the next level. Among the enemies are such famous characters as Rock Lee and Shikamaru, who use a variety of proprietary techniques to prevent the hero from completing the target.
‹
›
Home
View web version