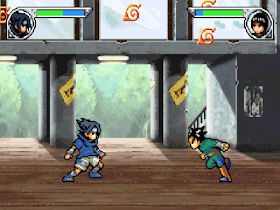 Genre: Action
Perspective: Side view
Art: Anime / Manga
Gameplay: Fighting
Published by: Tomy Company
Developed by: Aspect Co.
Released: 2004
Platform: Game Boy Advance (GBA)
The main characters are Naruto, Sasuke and Sakura. Each of them has unique abilities. Sakura is very smart, Naruto is brave, and all three heroes can call on Kakashi and Kiba. The action of the game focuses on boss fights, although other enemies are encountered. In addition to individual abilities, each character has a powerful magic attack Jutsu attack, as well as super-speed, precision strike, slowing down time, as well as a stun move, which, in fact, paralyzes the enemies. Two players can act in cooperative mode and complete the game as a single team. In addition, up to 4 players can fight each other in multiplayer mode.
‹
›
Home
View web version