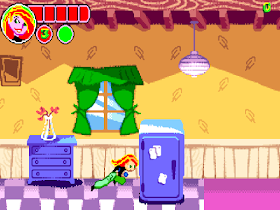 Genre: Action
Perspective: Side view
Narrative: Spy / Espionage
Gameplay: Arcade, Fighting, Platform
Published by: Disney Interactive
Developed by: Digital Eclipse Software
Released: 2002
Platform: Game Boy Advance (GBA)
As usual, Kim should prevent Dr. Drakken villainous plans. This time he wants to take over the world. The devil doctor hired thugs using various mechanical devices to prevent them from literally at every turn. Not only that, he kidnapped his friend Ron. Using various devices and hand-to-hand combat skills, Kim fights with enemies in Bueno Nacho, in the high school corridors, goes to Paris and even into outer space. Dr. Drakken, along with Monkey Fist and Shego, are the most important rivals, and they must be defeated, otherwise the world will be in terrible danger. Fortunately, her faithful Wade will give advice and help to achieve success in a timely manner, and items such as a Lipstick Laser or the Grappling Hook combined with martial art should ensure victory.
‹
›
Home
View web version