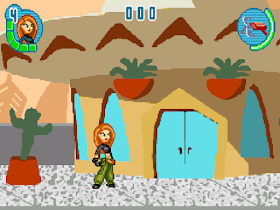 Genre: Action
Perspective: Side view
Narrative: Detective / Mystery, Spy / Espionage
Gameplay: Fighting, Platform
Published by: Disney Interactive
Developed by: Artificial Mind & Movement
Released: 2004
Platform: Game Boy Advance (GBA)
In the sequel to Kim Possible, the main character fights with Falsetto Jones, Gemini, Duff Killigan, Shego and Dr. Drakken in four episodes of the game. In each new episode, Kim gets a new acrobatic ability or a new device. She can bounce off walls, throw bombs with glue, owns judo techniques, and with the help of a pocket mirror can reflect laser beams. If there are too many enemies, you can go to the trick and become invisible. After acquiring new skills and devices, you can return to the previous level and enter previously inaccessible areas. Remember, with Kim everything is possible!
‹
›
Home
View web version