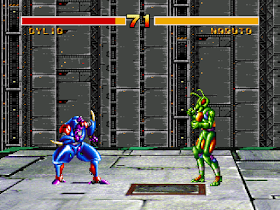 Genre: Action
Perspective: Side view
2D scrolling: 2D scrolling
Gameplay: Arcade, Fighting
Setting: Sci-Fi / Futuristic
Published by: SEGA of America
Developed by: Almanic Corp.
Released: 1994
Platform: SEGA 32X
An exciting 2D fighting game, new features of the 32-bit add-on to the Sega Genesis give new features and effects in the fighting game. Zoom in (zoom / zoom) is used throughout. And other various effects that were previously not possible or very difficult to implement. It also became possible not only to pump the character on any scale, but also to replace its body parts with more improved ones. The game has a semblance of Fatality Finishings that Sega has previously used in Eternal Champions, and Midway Games was popularized in the Mortal Kombat series.
The game itself is seasoned with an excellent plot. In an unknown star system on the way to space mines, a group of prisoners gathered from different galaxies arranges a rebellion and defeats the guards, taking control of the spacecraft. But during the debut, the control of the ship was significantly damaged.
After many days of drifting in open space, the criminals understand that their only hope is to seize another spacecraft, and from its side send a distress signal to call the warship for help. Then they cheat another space ship and ram it. But the impact of one ship on another almost completely destroys the ship, and kills almost everyone except a small group of four people from each ship. Only one small lifeboat survived. Those who survived are now fighting to the death for their only chance of salvation.
The Japanese version of the Cyber ​​Brawl game is significantly different from Cosmic Carnage. Since there are three other warriors. These are people in anime style. And this version of the game is more bloody, so if you like this in games, it is preferable to play the Japanese version of the game.
In Japan, the game was released under the name Cyber ​​Brawl.
In Europe and the United States, the game was called Cosmic Carnage.
‹
›
Home
View web version