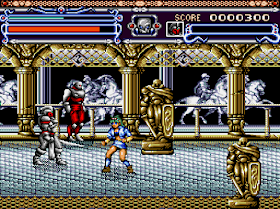 Genre: Action
Perspective: Side view
Visual: 2D scrolling
Art: Anime / Manga
Gameplay: Arcade, Beat 'em up / Brawler
Setting: Sci-Fi / Futuristic
Published by: Wolf Team
Developed by: Wolf Team
Released: 1993
Platform: SEGA CD / Mega-CD
The situation with Beat-Em-Up’s on the Sega CD is sad, although considering the total number of games is quite predictable. They exist: the average Sengoku Denshou, lousy Cliffhanger and clearly inferior on all fronts to the SNES Ninja Warriors option. The clear leader is Final Fight CD, high-quality transfer of the arcade hit. But there is one more game, released only in Japan, but with its performance it deserves a certain fame. But more about that a bit later.
Interesting story about the Beat-'Em-Up'ah Sega CD only a story about the company Wolf Team, which is already very uncommon. It was born from Telenet employees, and the first years of its existence were hard: NES was in favor, and the release of games for systems like NEC PC98 and Sharp X68000 didn’t foretell either fame or profit. But in 1990, thanks to the collaboration with Renovation Products (publisher of the American market of games for MegaDrive), "Wolves" began to produce and develop games for 16-bit Segou, and from next year on its addition. The main hit on MegaDirive is Arcus Odyssey, a fascinating isometric action in fantasy entourage. On the Sega CD there were mostly transfers of arcade games, mostly interactive, which, by virtue of the capabilities of the SCD, looked unimportant. Plus, the company tried to be a competitor of KOEI in the field of historical-Japanese strategies, but I can say little about it - not a fan of such games) The company began to move away from supporting MegaDrive, and released several games on SNES, the last of which was turning her name is Tales of Phantasia: the pearl of a 16-bit role-playing structure, which gave rise to one of the most successful TV series that has become the flagships of the JRPG direction to date.
During the development of the masterpiece, disagreements arose, and some employees left the Wolf Team and formed the humble company Tri-Ace, the creators of the Star Ocean series and the Valkyrie Profile. The rest joined Namco to create further parts of Tales of ... and is now called Namco Tales Studio. Strange, but before Tales’a, role-playing artists from the company (who mostly went on the Sega CD) didn’t stand out in any way.

And now about the game

Annet Futatabi is the final part of the trilogy, which, although it includes different games by name, but their action takes place in the same world, with common characters. The first game is El Viento (Genesis, 1991), in which the main character is our Annette - a decent platform action. The second is Earnest Evans (Sega CD, 1991; Genesis, 1992) - a passing thriller in the style of Indiana Jones, with the father of our heroine (although he pulls more on her boyfriend) as a hero. The third game has shifted towards the classic Beat-'Em-Up’a, which obviously benefited)
The game is opened by a video for a perky Japanese song dubbing from the exotic adventures of this little family)
Since the game is in an enemy language, I will not tell all the nuances of the plot, but from what you see it is clear that Annette and Ernest get into a European castle during their next voyage, where they are attacked during the reception to get hold of Annette's amulet. In addition to the loss of jewelry gets in the face and is captured dad. So all the problems fall on the shoulders of our young heroine. And then there will be mutants, cyborg and the salvation of the world.
By the way, there is a lot of video, and considering that the game is a bit short, 60% of the entire passage take up percent - but they are made qualitatively and in terms of drawing and voice acting - to watch them enjoy.
But the graphics in the game itself raises questions - especially on some levels. Sad backdrops, gray images in general - it would look decent on 16-bits (and even other hits like Streets of Rage 3 look more solid), but on a more powerful system you expect better design.
But on the sound moments a complete break. How fallen enemies shout, how much pain and despair in their bellows! Even the death cry of the heroine is not so juicy) The sound of blows, falls - everything is like in the most elite houses) Muzychka is also on the level - clockwork and not annoying.
Walk through the gameplay. The levels are so-so, but, fortunately, short and do not have time to get bored. The bosses could be better, the final one just disappointed. Now compliments - everything is managed adequately, although the types of attacks are not enough. The magic performed with the Golden Ax zakos helps, but when bosses appear, they turn it off and this is unfair.
The most pleasant thing is that each type of ordinary enemies and bosses has its own type of behavior, and you need to look for a certain tactic for them, and after its detection everything will become easier. Although I would not call the game difficult initially, plus the endless continent.
And yet, with all its flaws, the game was the sweetest. And after the final video, even I was deeply moved - a solemn ceremony, Annette in a beautiful dress, a church against the background of an evening sunset.
‹
›
Home
View web version