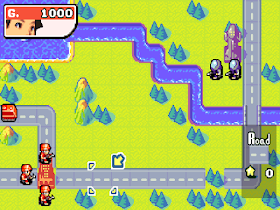 Genre: Strategy / Tactics
Perspective: Top-down
Pacing: Turn-based
Published by: Nintendo of America Inc.
Developed by: Intelligent Systems Co.
Released: 2003
Platform: Game Boy Advance (GBA)
There is no doubt an improved version of the first part of the game, in which you are offered to deploy your tactical power into many modes and campaigns, including the editor of your own maps. Managing the actions of the units did not change, only the battle map was updated, it became a little more, the creation of their maps, which can later be saved and participate in battles for the Capitol between friends or a computer, is especially attractive. A single company offers a fairly extensive plot and a gradual increase in the complexity of the fighting.
‹
›
Home
View web version