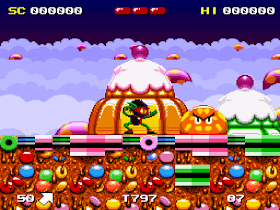 Genre: Action
Perspective: Side view
Gameplay: Arcade, Platform, Shooter
Visual: 2D scrolling
Published by: Gremlin Graphics Software
Developed by: Gremlin Graphics Software
Released: 1993
Platform: Super Nintendo (SNES)
Meet Zool, Ninja from the Nth Dimension, dude, faster than Sonic, who is quicker than Ken from Street Fighter, able to win any fight ahead of schedule in the first round! Yes, it's Zohol, a strange visitor from another world who made an emergency landing on a very strange planet for him! Will he survive there? This cute Sonic clone was very popular on Amiga, but on SNES it looks just a clone.
In essence, this is a direct competitor to the game Sonic the Hedgehog. The game appeared on Amiga, was met with enthusiasm and later ported to a dozen platforms of its time.
The version for SNES looks more solid - there is a demonstration of two levels, very realistic animation, fashionable special effects of zoom-rotation and sound on the head steeper. But in the version for SEGA very lack of colors. The game screen is wider than the SNES, but at the bottom is slightly cropped by the status bar. I personally do not quite understand the effects of translucence in giant cakes, and why are they in the foreground? But the speed is just high, SNES and was not standing nearby.
‹
›
Home
View web version