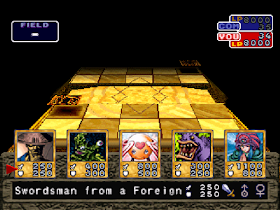 Yu-Gi-Oh! Forbidden Memories is not completely based on the Duel Monsters rules, but has slightly different rules (any monster can be summoned without tribute, life points cannot exceed 8,000, monsters and even spells and traps can be merged without the 'use of Polymerization, at the beginning of each turn many cards are drawn up to five, some cards have different effects than normal and no monsters have effects but they are all normal). The graphics are suitable for a platform like the PlayStation, generally the adventure is full of dialogue with the same graphic structure in 2D, while in the duels it has a 3D graphics and it is also possible to see the clashes between the monsters, rather than just the moving cards. In all there are 722 cards, mostly monsters, which are collected in the map library. Each time you win a duel in both the adventure mode and the free duel mode, in addition to the stars, you also win a card whose power is equal to the skills demonstrated in the duel. In addition to the classic adventure mode there is alternatively the duel for two players, or the exchange of cards between the latter, obviously to do so you must have a block on two memory cards.

The cards are represented in two different ways depending on the version. The Japanese version presents them as the first cards that came out a few years earlier, in Europe they are like normal cards that are still printed today. The cards in total are 722, most of them are monsters, with very few spell and trap cards. The cards and the game have some differences from the original:
‹
›
Home
View web version