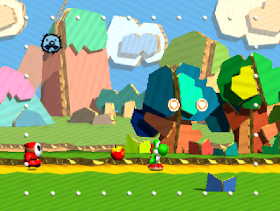 Genre: Action
Perspective: Side view
Gameplay: Platform
Visual: 2D scrolling
Published by: Nintendo of America Inc.
Developed by: Nintendo Co.
Released: 1998
Platform: Nintendo 64 (N64)
She is the ideological successor of "Yoshi's Island" - one of the most popular games for Super Nintendo, but unlike the latter, "Yoshi's Story" did not receive continuations or reworkings and gathered far more modest critics' reviews.
In "Yoshi's Story" the player controls yoshi. Yoshi, who lived on Yoshi Island, kid Bowser selected a very Happy tree and turned the world into a clamshell book. The whole game is made in the style of a children's book (developing the idea of ​​"Yoshi's Island", which is drawn with crayons). Six yoshi eggs were pierced in the new world and could not understand why they were so sad - but figuring out, they set out to get the tree out.

In "Yoshi's Story" for the first time the voices of the Yoshi were voiced not by scratching vinyl records, but by an actor - more precisely, famous video game composer Kazumi Totaka (who also wrote music for the game). It was this voice that became the official voice of the Yoshi, including the main green Yoshi, for a decade ahead. Only in 2010 yoshi voices were re-sounded in the game "Super Mario Galaxy 2".

The game was re-released only on two platforms: on iQue Player - strictly Chinese console, made officially in collaboration with Nintendo and compatible with Nintendo 64 games; and on the Virtual Console (VC) of the Wii console. In the week of its launch on VC, the game took second place on downloads, second only to "Super Mario Bros.", but in the end received even more critical reviews than the original on the N64.
A techno-demonstration called "Yoshi's Story" was used in the presentation of the Game Boy Advance console to the American public, but the technical capabilities that she demonstrated were in fact repeating "Yoshi's Island". Some GBA advertisements showed "Yoshi's Story", but the game on GBA did not come out, and there was no information on its development.
‹
›
Home
View web version