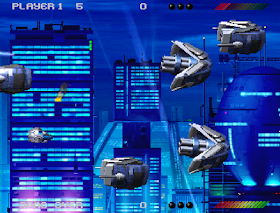 Genre: Action
Perspective: Side view, Top-down
Gameplay: Arcade, Shooter
Visual: 2D scrolling
Setting: Sci-Fi / Futuristic
Published by: Ocean Software Ltd.
Developed by: Team 17 Software Limited
Released: 1996
Platform: PlayStation (PSX, PS1)
This is a 2D shooter, developed in the company Team 17. In the plot of X2 used almost all of the games of the genre and added a little more turmoil from yourself. The techno music that accompanies you along the way, the futuristic menu, the exciting plot make the game very exciting. At your disposal comes one of the three agile ships, and you begin a journey through ten horizontal and vertical levels, each filled with strange alien ships. Landscapes are super modern. Rockets starting from the dunes, ships diving at you from any angle, natural obstacles like asteroids - all this brings your death. To survive, you have to shoot accurately, trying to get useful things (new weapons, better engines). You will receive them if you destroy a number of identical aliens. With a standard laser, you can "climb" to the super-laser, flamethrower, rocket launcher and ion surge arresters. But already at the first level you will understand that any weapon, up to the kitchen sink, is used against you, so you will hardly be able to survive. The only way out is to go ahead without trying to dodge something. Only in this way do you have a chance to reach the end of the level. A password system means that once you pass a level, you will never have to return to it again. In addition, the levels themselves are quite short. After several attempts, you will understand that neither mind nor agility will help you. In any case, you will die, you can even not be upset - inevitability is inevitable. The problem becomes even more urgent in the mode for two players, since the density of enemy fire is doubled. Although the game, no doubt, very beautiful and definitely good, but it is too complicated and bustling, which makes it available only for the aces of aerobatics.