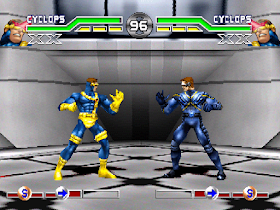 Genre: Action
Gameplay: Fighting
Published by: Activision Publishing
Developed by: Paradox Development
Released: 2000
Platform: PlayStation (PSX, PS1)
X-men: Mutant Academy, is a fighting game that uses six buttons, three buttons for punches and three for kicks. The video game was followed by two sequels: X-Men: Mutant Academy 2 and X-Men: Next Dimension. The characters in the game can be played with both their comic costumes and their costumes from the 2000 movie, X-Men. Characters that are not present in the film were given suits of a similar design.

There are ten selectable characters from the X-Men Universe, all of them selectable from the beginning in the versus mode, but the four bosses must be unlocked to play as in all other modes.