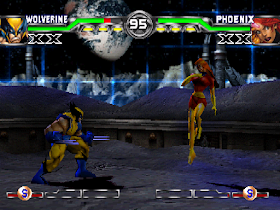 Genre: Action
Gameplay: Fighting
Published by: Activision Publishing
Developed by: Paradox Development
Released: 2001
Platform: PlayStation (PSX, PS1)
Sequel to X-Men: Mutant Academy. Both titles feature the X-Men in a fighting match in 3D, similar to Mortal Kombat 4. Like its predecessor, the video game allows the player to choose their character from several of the heroes and antagonists of the comic. The videogame also includes some contents of the film X-Men: The Movie as the sketches of the characters and costumes.
Among the characters in the videogame there is also Spider-Man, the only non-X-Men present.