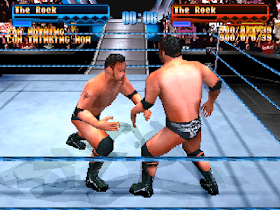 Genre: Sports
Perspective: 3rd-person
Sports: Wrestling
Published by: THQ Inc.
Developed by: Yuke's Co.
Released: 2000
Platform: PlayStation (PSX, PS1)
The most famous wrestling simulator before the release of WWF SmackDown !, was Acclaim WWF Attitude. The management of this game was taken from Tekken. Each button controller was responsible for the finality of the character. Unlike Attitude in WWF SmackDown! there was an original control system, for example, to accomplish the capture, it is enough to press the button O separately or together with the motion button. Another feature of the game, well accepted by the players, was the addition of backstage areas. It was the second wrestling simulator that used this function (the first was, previously released, WCW Mayhem). Each character comes out to his music, the Titanron. There are seven titles in the game, there is a rating of wrestlers. It is interesting to fight for example the title of the WWF Champion, it is necessary that the wrestler should be at least 5 th in the ranking, etc. The main mode of the game is "Season", which allows us to take part in the WWF storylines. The game also has a "Create a PPV" mode, in which you can create your own pvp-show. In this mode, you can choose the type of match, match participants, fight for the title (if possible), cover the ring. The created show gets the overall rating of the viewers and the rating of individual matches. The best shows and matches are added to the special ratings.

In the game you can create a maximum of 4 wrestlers. Creation of the character can be divided into 4 stages. 1st stage - general information about the character. In this section, the character is given a name, age, birthplace, favorite wrestler, music, under which he will go, etc. Stage 2 - creating the appearance of the character. Given the patterns of the head, trunk and legs, you can also set the height and color of the character's skin. Hidden wrestlers are not recorded in the roster, but you can use the templates of these wrestlers. Stage 3 - distribution of points. There are a number of points that can be divided into the following items: Strength, Agility, Techicality, Stability. These items have 5 levels. The distribution of points affects the list of open receptions. For example, if a created wrestler has a Tech 5 level, and a Strength of 3rd level, then he will not be able to perform Stone Cold Stunner. Points can be obtained during the passage of the "Pre-Season" mode. 4-th stage - the choice of character receptions. The choice of the character's methods depends entirely on the points distributed at the 3rd stage. In addition to receptions, it is possible to set up wrestling gestures (for example, prayer or applause), his entry into the ring and the celebration of victory. The only negative - selectable techniques can not be seen.
‹
›
Home
View web version