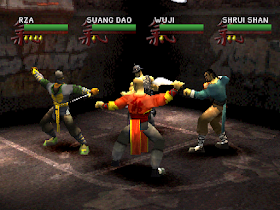 Genre: Action
Perspective: 3rd-person
Gameplay: Arcade, Fighting, Martial Arts
Published by: Activision
Developed by: Paradox Development
Released: 1999
Platform: PlayStation (PSX, PS1)
It would seem that there is definitely no shortage on the SONY PlayStation so it's in martial arts. The abundance of games-competitors forces the development companies to look for finds, raisins, which can attract the closest attention of buyers to their creations. Probably, you still have not forgotten such a very original game, like Thrill Kill from Virgin Interactive. Peculiar in it were not the plot and the characters (killer maniacs who got to hell and find out who is the most insane and perverted), not perverted to the logical limit of perverted stiffness (well, this then in our days can not surprise anyone was), no. The game has an age limit of + 18 years in Europe, I think it says a lot! Very original was the game concept: in the arena, not two but four players competed simultaneously, and using a device such as Multi-tap, it was possible to play in the fourth. Perhaps you remember what it was that opened the possibilities - to conclude and break alliances, to invent clever tactical decisions. The company Activision decided to use the find of Virgin in his new fight Wu-Tang: Shaolin Style. Despite the completely eastern name and the even more eastern subtitle - Shaolin Style, the heroes of the game were not the Buddhist monks in yellow robes, but the hip-hop group Wu-Tang Clan in full force. The group in our country is little-known.
What is the game itself? And the game is able to hurt the living at the expense of the abundance of participants in the fight. In addition, the members of the hip-hop group clearly had once a very criminal past, so they fight not only with their hands and feet, but also with various kinds of cold weapons - knives, chains, swords, knives and other. The game is sure to please both a few fans of an exotic group for our country, and just fans of the Fighting genre.
The game has a plot in the spirit of Chinese fighters, which is narrated by a huge number of long rollers, which, in my opinion, is a bit inhibited by the action itself, expressed in the removal of all opponents forward with their feet in white slippers with a particularly perverted cruelty! We play for the participants of the famous rap team Wu-Tang Clan, and you can play for each of the nine of its members. Each of them has its own unique fighting style (both in attack and defense) with remarkable physics, and on all the characters there are several hundred combo attacks (which, incidentally, is not surprising). Characters use different types of weapons, like traditional (swords or conventional fists), and not quite, for example, a microphone or a toilet bowl, imagine killing with these items? Now at the expense of the murders themselves: it is clear that, in consequence of their particular cruelty (consideration of this issue, in general requires writing a separate article, so you will become acquainted with them in the course of the game), the game has two varieties. The first one is sparing, without blood and atrocities (in this version, the game is pretty ordinary fighting game) - we play it without entering the password in the place where we are asked about it by the developers, simply by pressing the Start button. The second version - not truncated, with a full set of all means of killing and the consequent consequences, - we play it by entering the code provided by the developers. Strictly speaking, this is it: Triangle, Circle, X, X, Square, Triangle, Circle, Square.
‹
›
Home
View web version