World Ends with You (NDS) 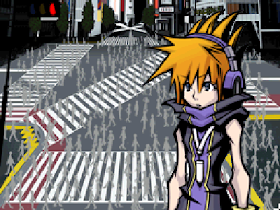 Genre: Action, Role-Playing (RPG)
Perspective: Bird's-eye view
Gameplay: Puzzle elements
Visual: 2D scrolling
Art: Anime / Manga
Interface: Multiple Units / Characters Control, Point and Select
Setting: Contemporary, Fantasy
Published by: Square Enix
Developed by: Jupiter Corp., Square Enix Co.
Released: 2008
Platform: Nintendo DS (NDS)
The game takes place in modern Shibuya, Tokyo area, which inspired the youth style of the game. Another source of inspiration was another game Jupiter, Kingdom Hearts: Chain of Memories. In Japan, the game was released in July 2007, and in the PAL region and North America - in late April 2008. An updated version for iOS devices, called The World Ends with You-Solo Remix, was released on August 27, 2012.
According to the story, Neku Sakuraba, the main character, is forced to take with his friends participation in the game, which will determine their future destiny. The combat system uses a variety of unique DS functions: combat takes place on both screens simultaneously, and for the attack you can use the console's touch screen or give commands to the microphone. Elements of Japanese youth culture, such as clothing, food and mobile phones, have become key subjects in the performance of missions.
The World Ends with You received positive reviews from critics who praised her for the graphics, soundtrack and good integration of the game process in the setting of Shibuya. Complaints were mainly aimed at an inconvenient training system and inaccurate control through the touch screen. A week after the release, the game was the second most sold among the games for DS in Japan and the absolute leader in sales for DS in the US. Siro Amano, screenwriter and manga artist in Kingdom Hearts, later created a manga in the plot of the game.

The World Ends with You belongs to the genre of action / RPG. The plot is divided into three large chapters, each of which includes a week, while the Reapers Game lasts. The player controls Nack and his companion, who are investigating Siboy while performing daily missions. Although most missions on the plot need to be completed in a certain time, it has nothing to do with real time.
Shibuya is divided into several blocks; some of them may not be available on a certain day, or they are closed by a wall that one Reaper can take away if Neku does his job, for example, bring him a hamburger or wear a certain brand of clothing. Neku can "scan" the area around him by activating a special icon. Scanning will show the thoughts of non-player characters existing in the real world, and sometimes memes that can be useful for moving along the plot. Scanning also reveals the presence of nearby random Noises that will float in the air or around the key character. The player enters into battle, if touches the stylus symbol of the noise. If you capture several characters at once, Neku will enter into a big "chain" fight lasting several rounds; for each character will be added one round. With each round, the complexity of the fight will increase, however, and the reward for the fight will increase proportionally. Changing the complexity of the battle and the level of maximum health of the characters in the game menu also affect the chance of trophy dropout.
In every quarter of Shibuya in the fashion various clothing brands that affect the gameplay. If Neku wears badges of those brands that are considered fashionable, then their strength increases; wearing "unfashionable" items has the opposite effect. However, a player can influence the popularity of brands in a certain quarter, if for a long time he will participate in fights in clothing or with the same brand badges. In stores, a player can buy new badges, clothes or food; the latter is spent on increasing the combat characteristics of the heroes.
In The World Ends with You there is a mini-game called Tin Pin Slammer, which can be played with a computer or with three live players via a Nintendo DS wireless connection. Tin Pin Slammer is very similar to the marble: it requires the player to knock out all the opponent's badges with the help of their badges from the playing field.
After the completion of the plot of the game, the player will be able to return to any game day and perform his tasks anew; while the statistical indicators of the heroes and their inventory do not change. Visiting the newly traversed days, you can perform new additional tasks and receive the "Secret Reports" award (one for each day), in which unknown details of the plot are revealed. Also, after completing the game in the menu, the item "Another Day" will appear - an extra day during which all the characters of the game get into various comical situations, and this episode is almost unrelated to the events of the main game.
‹
›
Home
View web version