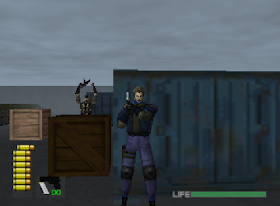 Genre: Action, Strategy / Tactics
Perspective: Behind view
Gameplay: Shooter
Published by: KOEI Corporation
Developed by: Omega Force
Released: 1999
Platform: Nintendo 64 (N64)
Operation WinBack is a simulator of a secret agent (Stealth-Action), whose role you will have to win back within 3-5 hours. The most important advantage is a well thought-out story, telling us about the everyday life of a steep agent who, with his team, is smashing the enemy base. Just pleases the eye completely 3D-shnyaya graphics, and to ensure that the gamer is not bored with the game seasoned with a variety of weapons, ranging from conventional Colt and ending with a 4-charge rocket launcher (!). But there is one drawback is management, but if you lose about an hour, you get used to it. Recommended for fans of the genre of stealth action.
‹
›
Home
View web version