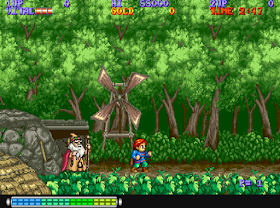 Genre: Action
Gameplay: Platform
Setting: Fantasy
Published by: Capcom Co.
Developed by: Capcom Co.
Released: 1989
Platform: Arcade Machine
This is quite an interesting platformer, based on the film of the same name, where you play the role of the dwarf wizard Willow and the warrior-sword Madmartigan, who have a dangerous mission to save the little child from the evil Queen Bavmorda, otherwise the world will plunge into darkness. The performance of the game at an altitude: everything is qualitatively and beautifully traced, an interesting plot revealing the events of the film. In the process of passing, you collect coins to later exchange them for increasing health or improving magic and weapons, just like in RPG. In general, a very high-quality project, in no way inferior to the interest of the film, and somewhere even surpassing it.
‹
›
Home
View web version