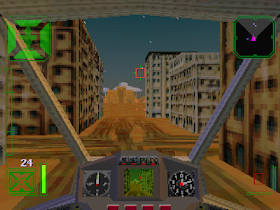 Genre: Action, Simulation
Perspective: Behind view
Gameplay: Shooter
Vehicular: Flight / Aviation
Setting: Sci-Fi / Futuristic
Published by: Sony Computer Entertainment of America
Developed by: SingleTrac Entertainment Technologies
Released: 1995
Platform: PlayStation (PSX, PS1)
In the game Warhawk you will find yourself on the pilot's place in an experimental plane called, of course. Warhawk, Strange and unkind forces are trying to capture the whole world, which is gradually covered by a network of terrible military bases of the enemy, led by a completely insane scoundrel named Kriel. His forces have a lot of new technologies unknown to people and an unpleasant ability to materialize almost instantaneously in any corner of the Earth. The power of Criil appeared because of the use of a new radioactive material - Red Mercury. Your missions are completed and considered successful only if you manage to capture at least a certain number of canisters with this substance. You, at the moment, the last hope for the forces defending the planet, no one else will take care of it. You and your glorious jet fighter must show the damned "basurmans" what awaits them if they do not stop ranting and offending honest people. Warhawk was designed to become the main assault weapon of the United International Forces. He is perfectly armored, armed and can successfully hit targets from a small height, while remaining virtually invulnerable. While this aircraft has the ability to hang over the target, it turns out to be an ideal machine for stripping small areas of the territory and destroying everything. In addition, on its board there is a mass of all kinds of weapons of the last sample. In order to drive a super-mobile car, you will have to master a few fairly simple key combinations, but for this you will get an excellent reward - the car perfectly suits you, flies very smoothly, and the ability to soar on autopilot will save you from any accident.
The graphics in the game Warhawk simply wonderful. The enemies there look very scary, big and very unattractive. The way the fire from the guns is modeled is simply brilliant. Rockets sweep across the sky, leaving 3D gas routes, small rockets remarkably accurately hit their target, and in general, the one who designed all this visual splendor is worthy of praise. The first level is simply amazing. Unfortunately, later levels are much less attractive. "Gauntlet of Pain" is a very boring thing - the name is suitable. And if you also remember the previous levels, then there is every reason to become bored. The last level is very average in the game, but it is interesting because the central tower is the highest in the city. At the same time, it will be quite difficult for you to finish off the final boss, although it is somewhat braking - a big head, small legs .... This, by the way, is the final incarnation of Kriel, who is now trying to hold all his red Mercury - but in vain. In the end, no matter how you turn, Warhawk proves to be an excellent game. You can enjoy it for a very long time.

Select an item in the menu called Special Access, and enter the following codes for a variety of effects: