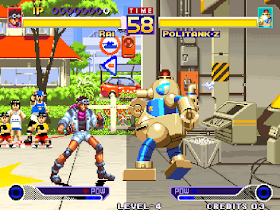 Genre: Action
Perspective: Side view
Gameplay: Arcade, Fighting
Art: Anime / Manga
Published by: SNK Corporation
Developed by: Sun Corporation
Released: 1996
Platform: Neo-Geo
Game of the genre fighting. She attracts her pleasantly cheerful atmosphere. It is more dominated by bright colors than dark ones. All the characters are made with taste and differ from each other by their originality. The game is not difficult to manage. Beginner gamer very quickly immersed in its atmosphere. Many combo attacks are easily done by simply clicking through the buttons. Only long special techniques will have to be learned, but they are worth it. Each of them is drawn at height. In addition to the usual fights, there are also bonus battles in which you have to fight with unusual opponents. Qualitative music is performed by experienced Japanese composers and almost spoils the game. Each character is assigned its own stage. Depending on the time of day, the shadow coloring of arenas changes.
‹
›
Home
View web version