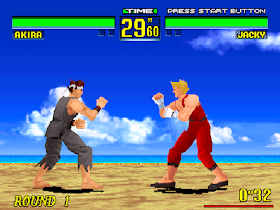 Genre: Action
Perspective: 3rd-person
Gameplay: Arcade, Fighting, Martial Arts
Published by: SEGA of America
Developed by: SEGA-AM2 Co.
Released: 1995
Platform: SEGA Saturn
It had higher-polygon models (compared to the original's Sega Saturn port), texture mapping, and some gameplay changes. It was given free to all registered Saturn owners in the US via mail and was available for sale in Japan and Europe.
It also had an arcade release on the ST-V (an arcade platform based on the Sega Saturn) and in 1996 was ported to Microsoft Windows as Virtua Fighter PC. The Windows version played in a higher resolution and had the option to use the textured Remix models or the original flat-shaded models.