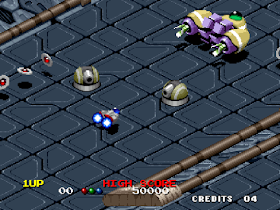 Genre: Action
Perspective: Bird's-eye view
Gameplay: Arcade, Shooter
Visual: 2D scrolling, Isometric
Published by: SNK Corporation
Developed by: Sammy Corporation
Released: 1992
Platforms: Neo-Geo, PlayStation (PSX, PS1)
This game is worthy of the genre shooting / fly. The developers wanted to give it a 3D atmosphere, and they succeeded. The game is qualitatively drawn volume objects, impregnated with a strict color palette. Here, the gamer is immersed in the atmosphere of space and controls the flying ship. In this game a lot of different weapons, which is distinguished by its beauty of special effects and firepower. Also here your flying ship is opposed by a variety of enemies, which are qualitatively traced in 3D form. From the player, in addition to the reaction speed, also requires a small wit, without which he can not pass and one level.
‹
›
Home
View web version