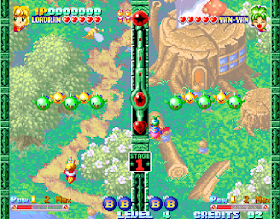 Genre: Action
Perspective: Top-down
Gameplay: Arcade, Shooter
Art: Anime / Manga
Published by: SNK Corporation
Developed by: ADK Corporation
Released: 1996
Platform: Neo-Geo
Funny game of the genre shooting / fly. To a greater extent, it is designed for children's audiences. Soft pleasant sprites, music appropriate to the atmosphere of the game, bright special effects can draw many people of a young age and not only. You can manage here one of nine characters. Each is distinguished by its own style of shooting, an aircraft or creature and special attacks. When choosing a character, you start without stopping to shoot at enemies and try to get around your opponent, which is to your right. Also the locations in which the battle takes place are beautifully executed. The game is very dynamic and will not allow the gamer to relax.
‹
›
Home
View web version