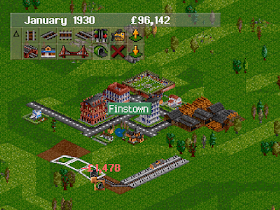 Genre: Simulation, Strategy / Tactics
Perspective: Bird's-eye view
Gameplay: Managerial / Business Simulation
Visual: Free-roaming camera, Isometric
Pacing: Real-Time
Interface: Multiple Units / Characters Control, Point and Select
Vehicular: Bus, Flight / Aviation, Hovercraft, Naval / Watercraft, Train, Transport, Truck
Published by: Ocean Software Ltd.
Developed by: Chris Sawyer Productions
Released: 1997
Platform: PlayStation (PSX, PS1)
After the noisy success that the PC and Amiga versions had a few years ago, the game of Transport Tycoon comes out on the screens and consoles of the PlayStation system - a worthy continuer of such classic games as Civilization and Sim City 2000. You are transported in 1930, when there were neither current railways, or powerful "Boeing". Starting with an initial capital of £ 100,000, you must create an efficient and profitable transport network, working in a highly competitive environment with other companies. In the course of time, you will need to introduce more advanced and high-speed modes of transport, because the simulation time in the game is not much, not a little ... 100 years! To become a Transport Tycoon is not simply to cram a lot of transport enterprises into the natural environment. You must carefully study the growing urban agglomerations in order to best link them by rail, road, sea and air, taking into account the prospects for population growth, existing routes of communication and a host of other factors. You can be resisted by local authorities if they consider that by their activities you are violating the interests of their city.
If your income grows over time, you can start investing in construction or creating new vehicles. Moreover, it is necessary if you want to withstand competition. Remember also that even the most modern vehicles are subject to accidents, so you should always have a reserve of money for repair and restoration work. Finally, even in a computer game you can not get rid of not paying taxes!
Management of the game is based on the use of icons in a very well-designed graphics system. When the landscape on your screen is filled with airports, docks, etc., when different vehicles start to snoop back and forth - each according to its purpose, you feel great satisfaction, you feel like a creator.
The main dangers that lie in wait for you are the competition from other contenders for tycoons, as well as the inevitable natural disasters. When the whole area is hit by a strong earthquake, all your efforts should be thrown on the restoration of the destroyed.
During the game, the terrain is observed by you in an isometric view, with a full overview, which gives an opportunity to explore all the features of the situation and topography. This, of course, the version for the PlayStation is very different from the computer versions.
Although at first it may seem that the fun with tiny cars, locomotives, etc. - a childish prank, in fact Transport Tycoon - the game is very serious. On the other hand, do not be afraid of such clever words as "strategy" and "modeling": this game is also available for beginners. In a very short time they will master with its basic techniques, and then they will not be torn off the screen!
‹
›
Home
View web version