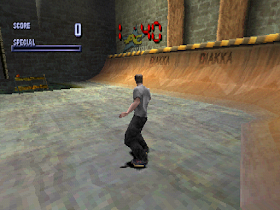 Genre: Sports
Perspective: Behind view
Gameplay: Tricks / Stunts
Interface: Direct Control
Sport: Skateboarding
Published by: Activision
Developed by: Neversoft Entertainment
Released: 1999
Platforms: PlayStation (PSX, PS1), Nintendo 64 (N64)
Probably not on the PlayStation platform skateboarding simulators are more popular than the Tony Hawk's Pro Skater series. And there is every reason for that. Here you will meet a whole company of world-famous professional skaters, each of which has its own style of riding on the board and has a set of unique tricks. You will have the opportunity to ride through the streets of virtual San Francisco, fly over the skatepark ramps in Chicago, as well as visit other real-world areas for skiing.
The game involves eight professionals, the mode of two players with a split screen, hundreds of great tricks, tricks and combinations, including riding rails and puzzling somersaults. Realistic scenery and tracks, including high-speed highways and supermarkets, secret areas, hidden cuts and hard-to-reach places, where you can only get by doing a risky stunt.
Tony Hawke is a legend of skateboarding. He is without a doubt the best racer on the trumpet and in the bowl of all who ever got on a skateboard. All the tricks and their variations from real skating are present in the game, all that Tony has become famous for. Please note that his influence is noticeable not only in the movements of the characters that were shot from this fearless rider, the fact is that thanks to him we got a completely unusual atmosphere in which all possible tension of this extreme sport was transferred. Given the success of the famous game Electronic Arts - Street Sk8er, it was easy to predict the emergence of a huge number of various games on skateboarding. Fortunately for all fans of this sport, Activision, with its passion for licensing as much as that of Electronic Arts, decided to choose a rather accurate reality playback rather than the arcade approach that was used in Street Sk8er. The game uses a complex system of tricks and combinations that will allow you to use hundreds of variations of different techniques, but you should not be scared of beginners, the game has a very balanced approach to any player. The atmosphere in which the competitions will be held will vary enormously, starting from highways and ending with hammered trails in the city center and grounds in front of supermarkets. In all versions of the game you will have a lot of opportunities for the most incredible tricks, also everywhere full of secrets, as well as areas that are just hard to get to. The game mode for two players will also offer you any other nice features, you can compete in a game with a split screen in several modes, including in an aggressive confrontation-this is exactly what the game of the company Electronic Arts lacks. In order to create a video game based on skateboarding, it was just such a hero as Tony Hawke who is quite sensitive to his sport in order to achieve the highest class of realization of this project.