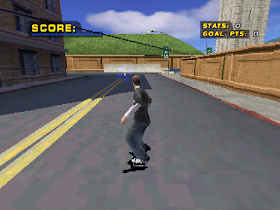 Genre: Sports
Perspective: Behind view
Gameplay: Tricks / Stunts
Interface: Direct Control
Sport: Skateboarding
Published by: Activision Publishing
Developed by: Neversoft Entertainment
Released: 2002
Platform: PlayStation (PSX, PS1)
The fourth game of the series Tony Hawk's Pro Skater, which became final on the PSX, completely left the realistic skateboarding. Now your character will not only easily keep his balance where he can not be held, but he will remain on the board after a jump from a tall clock tower. Speaking of other significant changes, we can mention the revised career regime, which has lost an annoying timer and now gives out tasks by means of colored coins denoting the difficulty of their implementation. Otherwise, it's the good old Tony Hawk's Pro Skater, though it's sometimes monotonous.
‹
›
Home
View web version