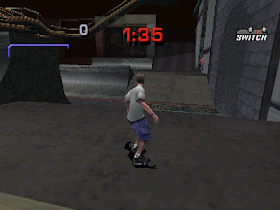 Genre: Sports
Perspective: Behind view
Gameplay: Tricks / Stunts
Interface: Direct Control
Sport: Skateboarding
Published by: Activision Publishing
Developed by: Neversoft Entertainment
Released: 2001
Platform: PlayStation (PSX, PS1)
The most famous skateboarder is Tony Hawk again on PSone. As always, at your service mode of training and careers, red-selection of boards and levels. You need to perform a huge number of tasks, open a bunch of secrets, collect a lot of prizes and learn new tricks. And all this for a limited time. In Tony Hawk's Pro Skater 3, developers do not offer virtually any innovations. Roughly speaking, you have only a slightly modified and decorated clone of the second part of the series. All the same game modes, all the same skateboarders to choose from, all the same levels, styled as city streets or industrial enterprises. Sometimes the previous part seemed to me better.
‹
›
Home
View web version