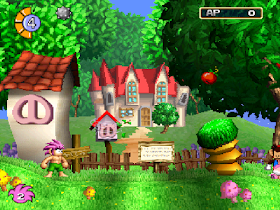 Genre: Action
Perspective: Side view
Gameplay: Metroidvania
Visual: 2D scrolling
Published by: Sony Computer Entertainment America
Developed by: Whoopee Camp
Released: 1998
Platform: PlayStation (PSX, PS1)
It happened so long ago that almost no one remembers this. Is that the four perennial old people that pass this story from generation to generation. The story of the hero that saved countless lives. The story of a little pink-haired boy named Tomba ...
The action of this legend unfolded on a distant and mysterious nameless continent. Once, after an exhausting hunt for a wild boar, Tomba comfortably settled near a fire, leisurely absorbing his prey. Looking around his habitat, he noticed that some pigs were robbing a peasant's cart. Tomba could not accept the injustice and ran to the rescue, but did not calculate his strength a bit, and a tree crashed. When he woke up, there were no pigs, a wagon, or a grandfather's bracelet ...
Without hesitation, Tomba went in search of things important to him. Soon he learned that evil pigs-magicians had attacked the continent. They enchanted many areas, changing their appearance beyond recognition. It was possible to return the bracelet only by beating them all ...
The essence of the game is to fight against pigs. At first, Tomba will have to find 7 bags where he can catch the leaders of the pigs. Then he must discover their habitats and fight with them. Catching every piggy, you will have to fight the most evil of them. Having won that, you will save the world and return the grandfather's bracelet.

Direction arrows - moving / swinging in the right direction (to get from Haunted House to Mushroom Forest you have to press not down, but up).
Right - picking up speed at motocross.
To the left is a reduction in speed on motocross.
Down - dive under the water (if learned skill Dive).
Triangle - opens inventory.
The square is running (if Animal Dash is learned) / talking / reading signs / swimming (if Swim is learned).
Cross - jump / pick.
Circle - hit / cancel. If the clamp can increase the force of impact.
Start - pause menu, where you can exit the game, download it or remove it from pause.
Select - invokes a menu where you can choose to view inventory, events, status Tomby or maps.
‹
›
Home
View web version