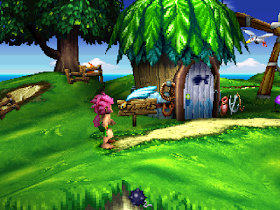 Genre: Action
Perspective: Side view
Gameplay: Metroidvania, Platform
Visual: 2D scrolling
Published by: Sony Computer Entertainment America
Developed by: Whoopee Camp
Released: 1999
Platform: PlayStation (PSX, PS1)
Once upon a time, on a very remote continent, a gang of pigs captured magnificent, tranquil cities. Smashing everything around, she turned bright, juicy, colorful landscapes into a dug-out land and filled it with mud. They mocked the people with their vile disgusting antics. But one day, a young man named Tomba peacefully slept under a tree, and when he woke up, he discovered that devilish pigs had stolen the gift of his grandfather. In fact, not knowing who did it, Tomba firmly decides to return the grandfather's gold bracelet and in the course of his quest he chops all these nasty pigs under a nut, restoring peace, beauty and saving people from the pig future.
Years passed and Tomba grew up, became a young, handsome man. Life is flowing around peacefully and quietly, and he and his friend Charles have fun without knowing it. But one fine day, a sealed letter comes in a very original way (it seems to be coming down from the sky). Curious Tomba opens the envelope, and from there Zippo flies out, a very cunning cute beetle, who tells the guys that the devilish pigs landed next door again, and even worse, they managed to kidnap Tomba's girlfriend Tabby, who now very savory life. Zippo shows the right direction, and in order not to waste too much time, Timba goes on another amazing journey to save his girlfriend and get rid of these vile creatures once and for all. And this is how this unusual, very fascinating journey of a pink-haired young man, with his cool boyfriend Charlie and his conductor Zippo, begins.

In addition to the basic techniques, Tomba can dress in different clothes to perform special activities.

In the course of his adventures and successful actions against devilish pigs, Tomba will receive this wonderful dress of his enemies, which will give him the magic power of her former owner. In order to use the clothes of the Magical Pig, Tomba must supply more energy in his Magic Gauge, jumping and biting his enemies like a vampire sucking on magical energy. When Tomba gain enough energy, you can press the Down + Circle buttons and attack the enemies that appear on the way. Do not forget that every time you use the Devil Pig's clothing, the amount of energy in Tumb's magic indicator noticeably decreases.
Note. Dealing with devilish pigs in this game is quite simple. Only it is necessary to wait for it in a certain place, and when a pig appears, grab and throw in the pig bag. But if a pig appears too high, and it is difficult to get to it, knock it down with any of your weapons and then also stuff it in a bag. Another thing is that pigs are very difficult to detect, but this is not such a big problem.

When you set off to fight the last devilish pig, you will see Kainen near the door. Talk to him, and he will present you with Unlimited Magic, which will greatly assist in this battle, and at the same time help you to get the Ice Candy, so necessary for a man in the city of Circus Town.

Hold L1 + R1, then press Circle, Triangle, Square, X on the start menu with New Game and Load Game options. Get a sound confirmation, and then you will be available to two new Level Select and All Weapons options, i.e. Level selection and all weapons on the Options Screen. Press the X button on the Level Select option and access the screen with all levels. Select the desired level and you will find yourself there as if on magic wings.
Select the All Weapons option, then click the Triangle button to get to the Jounal Screen, browse all types of weapons and select the ones you like. By the way, you can get access to all types of secret weapons in this way. However, as soon as you deactivate this option, you will again have only those weapons that you had at the very beginning. Here are the types of secret weapons in the game: Torch Hammer, Glacier Boomerang Doka Pin and Pig Ball.
Note: If you find these weapons in the three secret towers (including the golden tower of the Gilden Tower) in the usual way, it will remain with you. For example, you will find the Pig Ball as soon as donate ice candy (Ice Candy) to a man in the city of Circus Town. By the way, in the golden tower you can find a wonderful piece of Gold Powder, which will make you invincible, except when you fall into a hole and can be used an unlimited number of times. You can get it if you give people the following three subjects: Gold Moon, Gold Star, Gold Sun.
‹
›
Home
View web version