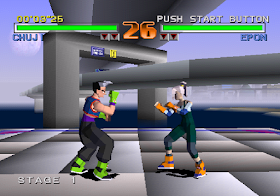 Genre: Action
Perspective: 3rd-person
Gameplay: Fighting
Published by: Sony Computer Entertainment of America
Developed by: Dream Factory Co.
Released: 1996
Platform: PlayStation (PSX, PS1)
Tobal No. 1 is a game like Tekken 2, and the character animation here is even smoother and more realistic. And the fights themselves are more real. Characters have complete freedom of movement around the battleground. Pressing the Up button displays the fighters on the screen, and the Down buttons - removes, i.e. buttons are not used for jumping and squats. For jumps, a special Jump button is used, which by combining the directions key (D-Pad) will allow the fighters to jump in nine directions - straight up, as well as right, left, forward, backward and in intermediate directions. Also used button lock strike. It allows you to dodge attacks, and in conjunction with the Down button allows fighters to grab the opponent, after which you can make a throw, or conduct melee techniques. The main attacks take place at 3 levels - top, middle and bottom. When using several buttons, you can hold spectacular and intricate combinations. Tobal No. 1 is a great and quite dynamic game. The abundance of modes (among which there is even a quest mode with RPG elements) - allow you to play this game for a long time, constantly discovering something new.