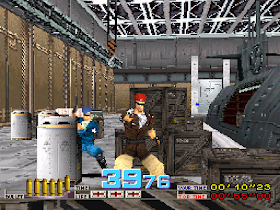 Genre: Action
Perspective: 1st-person
Gameplay: Rail Shooter
Published by: Namco Hometek Inc.
Developed by: Namco Limited
Released: 1997
Platform: PlayStation (PSX, PS1)
A gang of terrorists seized as a hostage, no less, Rachel is the daughter of the President of the United States and demands, no less, full power. Rachel rescue is entrusted to special agent Richard Miller. Yes, yes, well, of course, it is you. In conditions of limited time, avoiding the bullets of opponents, you wade through three episodes of four levels in each, skillfully acting with a pistol. The plot, though old, is immortal, but the game is very good. Perhaps this is one of the coolest shooting games for the PlayStation system, adapted from the popular arcade game. At the same time, Namco created a special game gun for rifle games - Namco NegCon. The wire coming from it is split in two: one wire is plugged into the controller port, and the second is plugged into the yellow video output socket behind the PlayStation console. This gives your shots unprecedented accuracy! But unlike other similar games, where only the accuracy of your shooting is tested, here you act in conditions of a hard time limit (crisis!); You need to pass checkpoints, which means that the pace of the game becomes crazy. Now and then on the screen the inscription "Hurry up!" Lights up, meaning that the next time limit is running out.
An interesting feature of Time Crisis is the presence of a switch on the gun, with which you can hide behind the screen. And this is not just a spectacular detail - in some moments of the game you cannot do without this technique. (To perform it quickly, however, you need to hold the gun with both hands.) So, at the beginning of the game, you can give yourself a break, release the switch and disappear from the screen, and then suddenly appear in the line of fire. Showing dexterity, it is possible with the help of this technique to move away from the tracer bullets of enemies, and also to evade dangerous external objects. True, hiding, you for some time lose the ability to follow the movements of enemies. In addition, precious time is running out. But in addition to the Timed Mode, there is a great Story Mode where you actually play the role of Richard Miller, a desperate shooter who is trying to free Rachel, captured by a terrorist group. A girlfriend is about to be executed, so you have to get to her as quickly as possible, before it's too late. The action takes place in a huge fortress, in different interiors - in warehouses, in elevators, in the clock tower (where the girlfriend languishes), as well as in the courtyard. Sometimes Richard has to resort to tricks: for example, run along a narrow corridor with a mirror in his hand, and if an enemy’s reflection appears in the mirror - turn around and shoot back!

Since the first part of this game is very simple, let's start immediately with the second. So, prepare your gun with a laser sight and fight!

To get to the lift on the left that takes you to the Ballroom, quickly kill all the enemies in this area. If the time counter (countdown) turns on at 59.99, then before the countdown is 25.00 you should get out of here. If you do not have time, then go to the Shopping Center.

Here you need to choose one of two roads. After the "junk" parachute is dropped, the Crane control center must be shot. Then he will fall and punch a hole through which to penetrate the Arms Factory. If you do not have time, then go to the parking lot (Parking Lot).

You will get here only through a lift in the lobby. At the end of this stage there are two lanes. If you beat the "electronic" guy in 50 seconds, you will see how Kantaris is running away and go to the Swimming Pool. If you do not meet at this time, go to the arms factory.

Here again there are two possible ways. At the very end of this stage you will see three huge warheads. Blow up any two thirds. Return to the parking lot. If you can not blow them, go to the living room Lounge.

Here you will meet orange people who will run away through the corridor in the center of the stage. Most will run away-in the living room. Kill the most part, go to Heliport.

It would be the easy end of the game. Kill the arachnid machine boss at the end of the stage, and for this you need to shoot the instrument panel. After this, it is necessary to kill several red people and, finally, Kantaris. She will try to knock you down with her car. To damage a car, release three clips into it from your gun, the car will lose control and crash into the column.

The “middle” ending could be better. To destroy the robot, you must "put out" the light on his belly. And in order to kill Kantaris, you need to cope with the robot quickly. If you succeed, the robot spins once, then another and will exit through bullet-proof glass. Now death will overtake Kantaris - it will fall out of the window.

Difficult ending. To destroy the aircraft, a lot of time, but do not pull with it. Cope with the task and immediately for Kantaris, which will wash off on another plane.

Start the game and shoot a box on the left side of the screen to select a regular mission. Two boxes will appear in front of you: a big one for a normal game and a small one for a game for a while. Shoot for the screen. "Easy" appears on the big box. Shoot the box and you will add five extra lives.

Select the arcade mission on the main screen and then on the next screen, which allows you to choose the Time Attack or Story mode, move the cursor over the edge of the screen and press the fire button. If the trick works, you will see the word Easy over the Story Mode option. Choose Easy, start the game and notice that you now have as many as five lives and a lot more time.

And here is another pair of tricks for this amazing shooter. To get into Cheat Mode, enter the main title screen and shoot the cursor in the center of the letter "R" in the word CRISIS. Then shoot twice at the intersection of the sight exactly behind the word TIME. If you do everything neatly and accurately, the Cheats Menu will appear with several new additional options. You can choose! Do you want to - start the next game with 9 lives!

The following trick will require a second controller. During the game press X, Square, Crcle or Triangle. This is the easiest way to instantly reload a weapon or hide from the aimed fire of enemies.
‹
›
Home
View web version