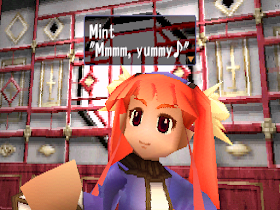 Genre: Action, Role-Playing (RPG)
Perspective: 3rd-person
Gameplay: Puzzle elements
Art: Anime / Manga
Published by: Square Electronic Arts L.L.C.
Developed by: Square Co.
Released: 2000
Platform: PlayStation (PSX, PS1)
Threads Of Fate is a role-playing game with a big emphasis on Action (Action / RPG), that is, battles do not occur in turn-based mode, as in most games of the Final Fantasy series, but in real time. In addition, there is a significant element of the platform - trying to get to the goal, the characters must overcome various obstacles, the success of which largely depends on the skill and reaction of the player. The gameplay is similar to the games of the Mana series, another SquareSoft line, and there is also some similarity to the cult The Legend Of Zelda (or Alundra and Alundra 2 for the PlayStation). Character attacks vary, Mint uses chakrams as weapons and masters magic well, while Ruhe, a physically stronger hero, uses a larger ax. He also has the ability to turn into different monsters, over which he had previously won. The menu of the interface and the system of choice of skills in their construction resemble the Secret Of Mana.

Paying 100 gold, you get the opportunity to fight with him. Run for a small house on the left side of the field. This is a very safe shelter. During the fight, you need to act in such a way that the house is always between you and Rod. At the same time, you can attack him using the X button, playing for Rue, and in response he can hit you only by chance, with just one trick, which is used extremely rarely. Continue to attack him from behind the house, until you achieve a complete victory. Get a bonus of 100 gold from him, and if you play in this fight for Mint, then attack with magic spells right through the house.

When you find the Legendary Sword in the Underground Ruins, the Legendary Shield in the Raging Mountain tori and the Legendary Helmet in the Maya's Tower, you can give them to Jarden in the tavern and get special food from him. He will cook this food only for you, but only if you bring all the necessary products. These products are, in fact, the corpses of monsters. Ask him to make a Today's Special dish, and he will tell you what is needed for this. Then exit the tavern, get the corpses of the corresponding monsters and return. Usually he will ask you for various "products", but this is natural, because the dish can not be prepared from a single product. When the necessary products are finished, he will again ask you to bring them. You can get only 10 such servings. After the 10th portion has been made, the Legendary items will collapse and you will receive a Platinum coin.

Here are some dishes Jarden can cook for you

New spells and Power-Ups (for Mint)

By finding special power-ups, you can change the type of magic spells that Mint owns. Here are some power-ups you can find:
The following Power-ups add new shades to your magic spells:

Mint will discover this precious item in the Gamul Forest. She has three options for how to deal with this thing. You can sell it for 1200 G as soon as you find it, or transfer Annette so that the prices for service in the tavern become noticeably lower. In addition, you can wait a bit and, after the first meeting with Wylaf, sell it to Marcum, then you can get 6000G.

Find this book when you cut the path to the Carona Forest. If you give this book to Rod, it will increase your strength by 4 points. This is a very significant and valuable find.

The Mysterious Statue (for Rue)

When Rue finds this statue in the castle of the Ghost Temple, he can sell it for 500 G or give it to Klaus. The second option is much better, because Klaus will give you a tincture that will raise your MP level by 10 points.

When you find a bottle of rare wine in underground ruins, then Mint and Rue can take it to the Hobbs shop, where they will receive a noticeable discount on all items. This is probably the most valuable and useful item in the game.
‹
›
Home
View web version