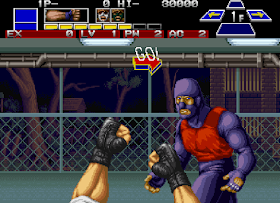 Genre: Action
Perspective: 1st-person
Gameplay: RPG elements, Shooter
Setting: Asia, Contemporary
Published by: SNK Corporation of America
Developed by: SNK Corporation
Released: 1991
Platform: Neo-Geo
Here you have the opportunity to play the role of a spy who fights against criminals. The view from the first person is rather original. You literally become face to face with crime. From the blows of enemies you can dodge by squatting. The protagonist can use various types of weapons (pistols, machine guns, etc.). After several knife penetrations into the body of the enemy, it is painted a blood color. This gives a shade of realism. Also, at levels, you can blow up barrels, shoot glass, punch pipes, etc. All this characterizes the qualitative physics of the game. Here there are a lot of abnormal bosses, which are quite difficult to handle. But no one said that it is easy to fight crime.
‹
›
Home
View web version